Green Rocky, Flower Grassy (BFF), anyone who is nice

Green Cloudy, anyone who is mean

Flower Tree is a female OC by Cutiesunflower.

She appears to be a tree with seven flowers on top of her. Her flower designs are charming centaury flowers stuck to her leaves to make her look more beautiful. She can sometimes wear a hawaii skirt, like Flower Grassy. She later had a redesign who is redesigned by NauhelFire39.

She will compete as a contestant in Object Sun.

She is one of the contestants who is competing in Battle To Win The Ultimate Prize.

Her score from her song is 9/10 because of her being beautiful. She is later chosen into Flower Grassy's team.

She got 6/10 for the cake challenge, making her get her first lose token, but she is still safe for being up for elimination.

Episode 3: Are you Smarter than a box?

Flower Tree got 3/5 on her test, and her team is not up for elimination.

She lost 15 points due to her having a lose token, along with Baseball Cap, and are ended up in the danger zone.

Like episode 2, she did worst in the challenge. Flower Tree wasn't supposed to duck it as it's close to the ground, making her get a lose token once again, and she is still in the danger zone.

She is safe, yet again, with 1 vote, but because of her Loke Token, she got 2 votes, but she is still safe from being eliminated. She barely did good in the challenge, making her kill only 75, only beating Green Rocky, who did the worst, and she is still in the danger zone.

She is safe, but with 1 vote this time. She placed 3rd in the challenge only beaten by Baseball Cap and Bubble Wand.

After being in the bottom two for a few episodes, she has finally been eliminated with 3 votes.

Her New Body (credit to NahuelFire39)

Her Body made by FireyTheFlameOfDreamIsland. 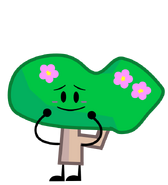 Retrieved from "https://objectshowfanonpedia.fandom.com/wiki/Flower_Tree?oldid=379141"
Community content is available under CC-BY-SA unless otherwise noted.