The Grassy Clone
Flower Grassy, also known as Flower Grass, or Grass Flower is an OC created by Cutiesunflower.

He appears to be a plant with a flower connected to it. Flower Grassy's original design is a bit different then his previous design, it's flower was big. In his previous design, his Grass came to the flower. In his current design, it was changed into Grassy from AOTO with a flower connected to it. Unlike all Grassy clones, he is not a recolor. He only has one major change, the flower connects to the grass is the only change to Grassy. Since October 2017, he has been seen wearing a Hawaii skirt to make him more Hawaiian. However, in Battle to Win The Ultimate Prize, he is seen without it.

His personality is very nice and friendly. He is also very kind. He can be happy or very sad depending on his mood. He can be sometimes mean to enemies because he doesn't like them. By using his happiness, he makes nice people happy. However, when someone is close to his flower and smells it, he freaks out because he doesn't like anyone smelling his flower and he needs it to survive. He is usually childish despite being a little older.

He makes a appearance in Cutiesunflower Hurt and Heal. He placed 2nd because he didn't get the most votes losing to Green Rocky.

He also makes an appearance in Cutie Island Hurt and Heal Season 1. He placed the final 10. Unfortunately, the randomizer removed his HP before 7 others, causing him to place 8th.

He also appears in Battle for Dreamworld. He is the second person to be signed up after Semir Ali Logo. He is not eliminated yet and nothing is known about him as of now.

He is one of the recommended characters in TTFCC. This is the second time he was recommended in a object show, or camp.

Best of the Rest

He also appeared as a recommended character in Best of the Rest. This is the third time Flower Grassy got recommended in a object show. The first was Battle For Wish Bush, and the second was The Fight for Cliché Castle.

In ROTBFDIWP, Flower Grassy is one of the 15 recommended characters who had at joining the game. He joined the game with 5 votes and he is signed up by Cutiesunflower, but he was later eliminated in episode 21.

Flower Grassy said that his team should be Grasslands, but Television named the team The Lifesavers instead.

He will be a contestant in Object Sun.

Flower Grassy is one of the contestants competing in Battle To Win The Ultimate Prize.

In the song challenge, his song is scored a 10/10. He got the most points out of everyone, with 19/20, making him the team captain, along with Bubble Wand, and he chooses first. In his team, he has Lizy, The Computer Brothers of Paine, Flower Tree, Wubbox, Green Starry, and Baseball Cap. His team wins.

For the cake challenge, he got a 7/10, and his team is safe once again.

Episode 3: Are you smarter than a box?

He is tied with most of the other contestants with 3/5.

In episode four, he didn't lose any points because he didn't get any votes and he didn't get a lose token, and he got the highest points out of everyone, with 59, and he isn't up for elimination.

For the challenge, he placed 7th, only beating Baseball Cap (who got the lose token), but he isn't up for elimination once again.

He did better in the obstacle course challenge and placed 4th. He isn't up for elimination.

After Chalk's elimination, he is ended up being in the danger zone, however, in the challenge, he has killed most of the bugs out of everyone, with 375, making him get a little higher. He gets 5 bones for winning.

He placed 5th, only beating Lizy, and he is UFE along with the other four.

In the elimination, he didn't get any votes and he is safe. He pushed Lizy off, but he was then pushed off by Bubble Wand, despite being friends and placed fourth. He's UFE again.

He was safe, again, with no votes. He did do good in the challenge, and placed last, getting him his lose token.

He was eliminated with 16 votes, and he was teleported into the TSB. After his elimination, Flower Tree became happy to see him again. 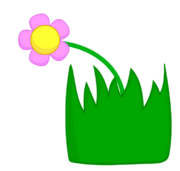 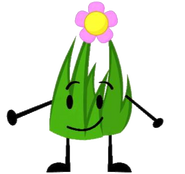 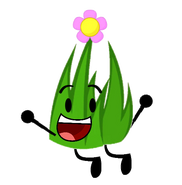 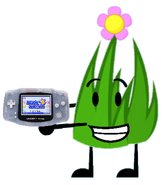 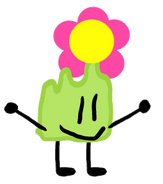 His pose by Bfdi is the best. 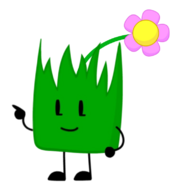 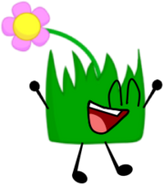 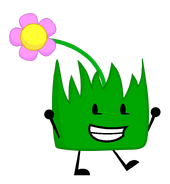 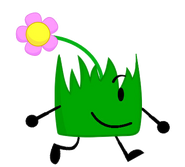 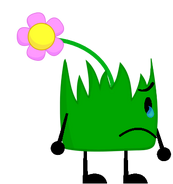 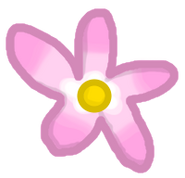 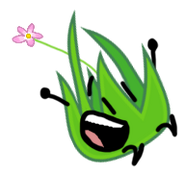 His redesign by Blue Tennis Ball. 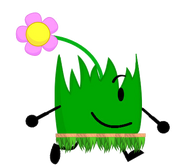 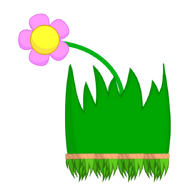 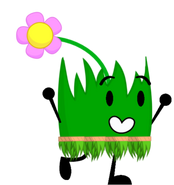 Retrieved from "https://objectshowfanonpedia.fandom.com/wiki/Flower_Grassy?oldid=437546"
Community content is available under CC-BY-SA unless otherwise noted.