Fire Exity reacts wildly to everything. She likes to make sure everyone around her is safe, even if it means she takes it a bit extreme. This means her personality is like Soap from Inanimate Insanity 2. Apart from that, she also gets annoyed at others who reject her safety. In addition to her character tropes, a theory that sprung up because of The Object Squad vs Evil Ghost Leafy, she might be selfish.

Fire Exity is an object with arms and legs. Her body is in the shape of a Fire Exit sign, with her face in the middle. Her mouth is in between the escaping person’s legs and the E for EXIT.

In a fanfiction called The Object Squad vs Evil Ghost Leafy, Fire Exity makes sure that Question Box And -1 are safe. She does yell at Green Face for putting -1 in a trebuchet and using him as a projectile, however. Fire Exity never dealt any damage to Evil Ghost Leafy, making her pretty useless on the team. Maybe it was for the benefit of her own safety? Who knows? If it is true, then Fire Exity is a selfish character.

In Clash For Object Supremacy, Fire Exity was the last to be picked. Donut was taken onto The Imaginators (Spikey Ruler’s team), but Fire Exity was forced into The Cool Crew, a team owned by Cherries. Sadly, in this show she doesn’t get much screentime. When she does, she’s hanging out with Soap, her best friend. Overall, this makes Fire Exity a forgettable character.

However, in Episode 3, she makes her team lose. This makes Soap bully her, and then instead of Fire Exity being eliminated, Soap is. Fire Exity forms a new team after receiving hate from her teammates. 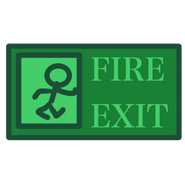 A redraw by BB230
Add a photo to this gallery
Retrieved from "https://objectshowfanonpedia.fandom.com/wiki/Fire_Exity?oldid=475568"
Community content is available under CC-BY-SA unless otherwise noted.