OHV 1: "The Beginning of Something Special"

"The Alliance Co-Leader" (before OHV 8)

Eraser Cap is an contestant on Object Hyperverse. She was part of Basket's Alliance before OHV 8. She is on team Splashy Bubbles.

Eraser Cap is usually a nice character. She is nice and caring to her friends, but if they do something bad to her, she will stop being friends and become enemies. (like what happened with Basket).

In the upcoming episode "Another Bad Object Show" She meets up with Cup, and then starts A fight with TNT. He then explodes and cracks the Earth open. Im not going to tell anymore, ok?

In "An A-Maze-Ing Episode" She became enemies with Basket after they fought over if Cup should be in their alliance, disbanding the alliance all together.

In "We Need a Carpenter" Basket came back and threw her into a tree, which caused one of her eyes to get injured. It is unknown when her eye will heal. 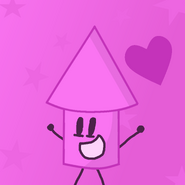 Voting icon
Add a photo to this gallery
Retrieved from "https://objectshowfanonpedia.fandom.com/wiki/Eraser_Cap_(OHV)?oldid=409345"
Community content is available under CC-BY-SA unless otherwise noted.