Start a Wiki
Dukey S. Teeler was the host of Big object battles! before Episode 4.

Dukey was made in MS paint

Dukey hosted the show Big object battles, but in secret, he also kidnaped characters to compete in his show. He also did not own a caps lock button, in Episode 4 of Big Object Battles!, he was killed off since he stole OCs when he thought he never stole OCs, he was then replaced by Baseball Cap at the hosting duties. 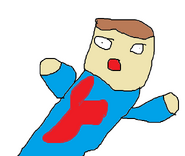 Remade Dukey
Add a photo to this gallery
Retrieved from "https://objectshowfanonpedia.fandom.com/wiki/Dukey?oldid=255950"
Community content is available under CC-BY-SA unless otherwise noted.