Start a Wiki
Dude, also "known" as The ZOMBIES ATE YOUR BRAAINS!! is a character of TBFS who rips off Fred.

Dude's personality is randomized, and his language is randomized. He sometimes is very boastful, sometimes has a similar personality as Firey, sometimes even gain traits, such as Potato's creepiness and Moneybags's abilities. Because of this, not lots of people are his friends, being the only friends are bananas, Toodya, Troll Face, and Gyro.

I think you already know. If you don't it's a dabbing banana, peeled (not fully), with mold on him. 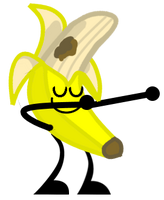 Dude's Idle.
Add a photo to this gallery
Retrieved from "https://objectshowfanonpedia.fandom.com/wiki/Dude_(TBFS)?oldid=405220"
Community content is available under CC-BY-SA unless otherwise noted.