Not to be confused with the BFDIA Character, Donut.

Donut, labeled The Round and Proud, is a male contestant on Object Mayhem. He was a member on Team Extravagant.

Donut is a nice and tough character. He is a tad bit overweight but doesn't let his fatness get in the way. He likes making friends and he dislikes people who are mean.

In Unusual But Good, Donut first appeared when he asks Cupcake if he could join her team. Donut didn't really do much other than this from this episode.

In Robot Frenzy, Donut was eliminated with 39 votes which was a record at the time. Donut questions why he got the most votes and assumes it was because he was overweight. Being eliminated made Donut very upset. He isn't seen much after this episode.

In To be or not to be, when Gun announces his plan Donut "mistakenly" plays the "DUN DUN DUN" theme. Donut is apologetic after doing this and asks Gun how he was able to spy on Team Lucky/Gun. After Gun tells Donut, he asks how Gun is able to watch his team.

In Hit and Miss, he summons a huge, green member of Bouncy Ball's species, under Gun's hypnosis. Before that, Camera tried to stop Donut from doing it, saying "No! Please don't do it!"

In A Space Odyssey, being under Gun's hypnosis and all, he votes for Dice.

In Tropical Overload, this is the first time without Gun's hypnosis and came 2nd and gets a chance to rejoin along with Notebook, Lego and Mirror.

In Dice and the Candy Emporium, Donut got the least amount of votes to rejoin with 254. 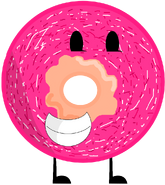 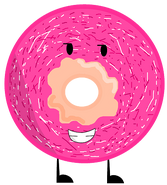 Add a photo to this gallery
Retrieved from "https://objectshowfanonpedia.fandom.com/wiki/Donut_(OM)?oldid=550277"
Community content is available under CC-BY-SA unless otherwise noted.