Cone & Pumpkin (Dollar Only), Cherry (George Only, Possibly) Edgy Diamond (Both Of Them)

Dollar is a simplified green American 1 dollar bill with a portrait containing George.

George is a simple green drawing of US President George Washington.

Dollar is a pessimist and is somewhat lazy and introverted, disliking running and performing onstage. He usually puts up with George’s presence, but he‘ll draw the line when he gets dragged into something. He despises George’s constant lectures and stories, however.

George is a patriotic and outspoken optimist who is trapped inside of Dollar’s portrait. He claims to be hundreds of years old and often tells stories and gives lectures, usually to Dollar. He also often drags Dollar into unwanted situations. 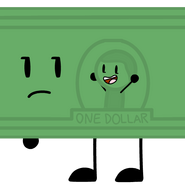 Add a photo to this gallery
Retrieved from "https://objectshowfanonpedia.fandom.com/wiki/Dollar_%26_George?oldid=445143"
Community content is available under CC-BY-SA unless otherwise noted.