Disco Ball is a female contestant in Object Universe. She was eliminated in episode 11 and placed 3rd.

I Have a Car for No Apparent Reason

In Revived Rivals, Disco Ball voted for Remote because she didn't like him. In the challenge, Disco Ball gave Ice Cream a suitcase and Disco Ball got immunity from the next elimination.

In Big City Objects, Disco Ball goes into the car and said to Map to get out of the car.

In Tumbling Trouble, Disco Ball seen that there is a hole in a wall and she wants to know why. It's payback for kicking Map out of the car and places her into the hole. When the hole exploded, Disco Ball loses her left leg. She tried to get her other leg, but her right leg got cut, and she is now limbless and starts to cry. In elimination, she got two votes, and was eliminated. 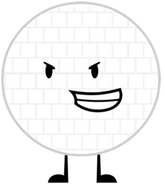 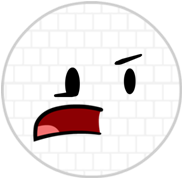 Add a photo to this gallery
Retrieved from "https://objectshowfanonpedia.fandom.com/wiki/Disco_Ball_(OU)?oldid=475937"
Community content is available under CC-BY-SA unless otherwise noted.