Diamond is a female contestant on Object Lockdown.

Diamond is an athlete, and always strives to stay fit. Her favorite activity is hiking, and she likes a lot of different exercises as well. Her best friend is Teapot, and they have been friends forever. Diamond always tries to save Teapot from harm, as she is a bit of a "klutz" at times. She can sometimes get a little mad and yell at other objects, as seen in Episode 8. She also likes to tease people, like Circle, when he was crying because he lost his hat.

Her athletic abilities showed, as she was close to the finish when she was first shown. Limey helped her get through the door, as she did not know the correct password. She then passed the finish line off-screen.

After the challenge ended in this episode, she was shown with her best friend Teapot.

She did not appear in this episode.

She suggested that her team should sit around and do nothing. Later on she asks Bottle how their retreat would work, and she agreed with Bottle's direction with the retreat. Unfortunately, her team lost, placing her onto the danger team.

She was shown with Teapot on top of the trees. She told Teapot that she will jump over the gap in the trees, and toss her a rope so she can get over. While she was jumping, she got killed by a baseball being thrown at her off-screen, despite diamonds having a hardness ranking of 10 on the Mohs scale.

When Fire Extinguisher casts the spell Diamond is revived and she is pretty happy about it. At the elimination Diamond received 129 dislikes and she was safe. and was put up for voting again.

She was first seen talking to Bucket about starting a band, and showed a video of her playing the drums to him, also stating that she's the "drum master" in the moment. Later on, when the challenge started, she was chosen to be a gatherer for her team. Not too long afterwards, she's seen in the water stating that she knows that her team will beat the guys, stating that her and the rest of her team were like "peas in a pod" but says otherwise after Bottle submerges Milky underwater. After the challenge ended, her team ended up winning, and she was seen being happy about, and asked Fire Extinguisher what her team's prize would be. She was put onto the safe team due to her team's high score.

Where Diamond is from 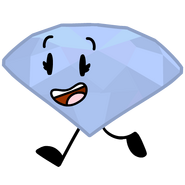 Add a photo to this gallery
Retrieved from "https://objectshowfanonpedia.fandom.com/wiki/Diamond_(Object_Lockdown)?oldid=404547"
Community content is available under CC-BY-SA unless otherwise noted.