Crazy Face is a character created by AzUrArInG. He's was scrapped around the development of the reboot of Object Masters due to AzUrArInG losing interest to The Ren and Stimpy Show. Crazy Face was based off of Ren. 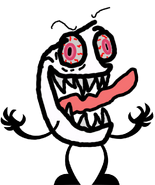 Crazy Face Pose made by TWDremaker2000

Crazy Face Surprised made by TWDremaker2000
Add a photo to this gallery
Retrieved from "https://objectshowfanonpedia.fandom.com/wiki/Crazy_Face_(AzUrArInG)?oldid=419574"
Community content is available under CC-BY-SA unless otherwise noted.