Green Cloudy (CS), Lego, anyone who calls him Biggie Brownie

Cosmic Brownie originally known as Rectangle Donut is a OC made by Cutiesunflower. He is a brownie with sprinkles on him. He has a white face. He might appear on Fight For The Prize. His new design uses a brown base of Cosmic Brownie instead of black and his sprinkles are bigger than before. He also appeared in Object OC Battle and Object 3 in 1 School.

His personality is similar to Spongy. He is nice and friendly, but he is very slow and can do challenges badly unlike many other OCs.

Cosmic Brownie made his first hurt and heal appearance in Cutiesunflower Hurt and Heal with the other 19. Due to his fatness, he was eliminated and placed 4th because of TheRobloxianGuy67, but he made it this far.

He made his first object show appearance in DMRE. He didn't join with the most votes, but he joined by Arle's Choice.

His own Body Secondary

His own Old Body Side 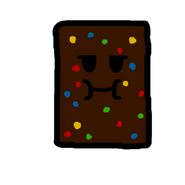 Add a photo to this gallery
Retrieved from "https://objectshowfanonpedia.fandom.com/wiki/Cosmic_Brownie?oldid=486509"
Community content is available under CC-BY-SA unless otherwise noted.