Cone is a female contestant on Object Lockdown.

Cone is a traffic cone with white stripes and an orange square-shaped base.

Cone could be considered as "mentally unstable", breaking out into making weird noises and refusing to be quiet when others ask her to. This behavior is what causes her to be unpopular amongst other contestants.

She wasn't seen in this episode but she got in the Danger Team.

She appears at the beggining saying that Dino was the perfect Drago. After Acorn exposes Notebook she calls her "Smelly Notebook". At the elimination Cone received 162 likes with only Sun beating her with 186. Cone is the first one safe with only 54 dislikes. Cone's team won the challenge so each Danger team member had to pick a Safe team member to be up for elimination. Cone chose Teapot because she didn't like her.

In this challenge all the competitors had to form in groups of five. Cone got in a group with Umbrella, Balloon, Dollar and George and Cherry. When Balloon asked what song should they play for the talent show Cone suggested that they should perform a Jazz Country song. Cone had an argument with Umbrella about the song which made everyone get in a fight. After their performance they got a total of 9/20 which was below average so Cone got in the danger team again.

This episode the competitors from the safe team would vote a danger team member to be eliminated. Cone only got 1 vote from Snowboard so she was safe. While they were heading to the forest Cone said that she couldn't take the spookiness but Bucket told her to shut up because she wasn't funny. Cone didn't manage to survive the challenge because she got killed by Edgy Diamond along with Teapot, Snowboard, Acorn, Dollar and George and Paint Palette.

Cone was locked down with 275 dislikes, only 3 more than Snowboard, who had the second most.

Where Cone is from 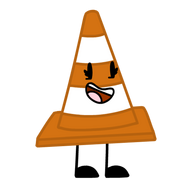 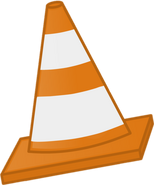 Retrieved from "https://objectshowfanonpedia.fandom.com/wiki/Cone?oldid=458342"
Community content is available under CC-BY-SA unless otherwise noted.