Cherry is an OC created by TheCherryWHY.

Cherry is a cherry that is dark red. In fact, it seems to be a bit pinkish too. Cherry has a large green stem with two leafs, which in some fan-made redraws, is quite long. Cherry has a cyborg eye and a bowtie. He also has cartoonish eyes, also known as "pie eyes".

He is often friendly and helpful, but he can get angry when someone makes fun of him. He is also emotional, as he can cry randomly. He is also somewhat sarcastic.

Anybody who isn't mean to him

People who bully him

Animations, South Park, Numberlemon, people who are nice to him & food

Sad but kind (and a crybaby)

Cherry in the Cherries' gallery.

In the comments of a video, somebody requested Cherry to draw "Carment", so he did, and this was the result. 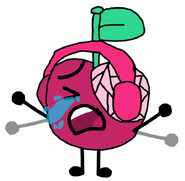 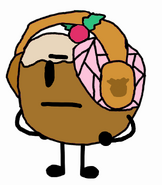 Cherry dressed up as a pudding for Christmas. 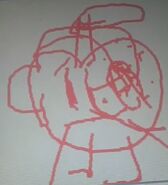 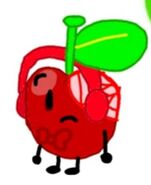 Cherry with a bowtie. 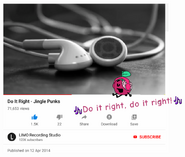 Cherry singing along to Do It Right by Jingle Punks.

Cherry, as he appears on the Scary Logos Wiki.

The previous picture, but zoomed in onto Cherry.

A redraw after the creator announced a design revision.

BB230's redraw of The Cherry Timeline.

An extremely old design of Cherry, created around May of 2018.

Yet some more BB230 artwork. (WHY AM I SMILING) 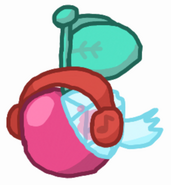 The creator's current profile picture on Fandom and YouTube. 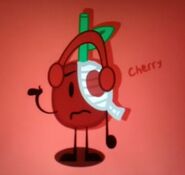 Cherry about to leave, whilst some of BB230's OCs wave at him.

2020 redesign. (Based of on Pokemon's Cheri Berry)
Add a photo to this gallery
Retrieved from "https://objectshowfanonpedia.fandom.com/wiki/Cherry_(TCW)?oldid=480214"
Community content is available under CC-BY-SA unless otherwise noted.