Button is a male contestant in Object Universe. He was on Team Strength, but he was eliminated in Language of a broken window.

He first appears in this episode. He failed the balance beam challenge making him fall down. He was placed into Team Basketball.

In Afraid of Heights, Button called Window a horrible host and he might make him eliminated. He gets chosen by Map who didn't do much in the last challenge, but he was afraid because it's very scary down there when he jumps making Team Strength up for elimination.

In Language of a broken window, Button got the least amount of likes with 10 likes. He forgets it and he is so aggravated. Button was eliminated with 33 dislikes, he said that he might be back soon.

In Revived Rivals, Button got 26 votes, which is not enough to rejoin the game. 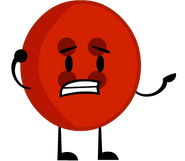 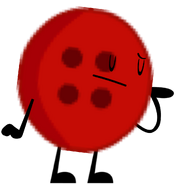 Add a photo to this gallery
Retrieved from "https://objectshowfanonpedia.fandom.com/wiki/Button_(OU)?oldid=328159"
Community content is available under CC-BY-SA unless otherwise noted.