Bullet is a contestant in The Medal Brawl. He is the main antagonist, somehow (other object shows which consists of elimination doesn't have antagonists). He kills other people and is very mean. He is placed on Team N.A.C.S, and he is the team captain of it.

In ¡Hole in One!, Bullet called his team name, Team N.A.C.S (also known as assasin ninjas with saws). Bullet wants to kill someone, but Vase told him that he might be the first person eliminated. Bullet hitted the golf ball with the golf stick and the golf ball shattered Jar into pieces. His team was up for elimination.

In ¡Oasis!, Bullet was in the bottom two with Bowly and he is about to be eliminated, but he received 5 votes and he is safe. While Bullet is sleeping in the train, Lemony uses his marker to draw on him. When Bullet looked in the mirror, he seen a scribble that was drawn by Lemony. Bullet hitted the door and started to chase Lemony for drawing a scribble on him. He followed Lemony until he got hit by a rail and was fallen into the train tracks. He said it's not bad when he is on the train tracks and he started to sleep. His team wins the challenge. At the end of the episode, Bullet woke up and saw a train, then he got crushed by a train.

In ¡Pirate Treasure!, Bullet was steering the wheel on the ship. In the challenge, Bullet starts to get Team NACS to get the other team. But the speaker said that any indication of violence will mean the elimination of the participant in the test. He called it awkard and the speaker heard him. Bullet wants to get the gold so he can win, he doesn't want that piece of soap to get him. When Bullet stopped walking, he seen Jar doing nothing except making noises. Vase told Bullet to leave him alone because it will not move. Lemony called Bullet's team losers, and Bullet used a knife to kill Lemony, making him die. Basketball, Bag, and Pillow screamed when Bullet killed Lemony. YFone told Bullet that is it necessary, but it's really not. He doesn't regret anything, and his team is up for elimination. 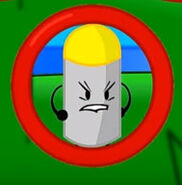 Being drawn on Bullet by Lemony with a marker.

Add a photo to this gallery
Retrieved from "https://objectshowfanonpedia.fandom.com/wiki/Bullet_(TMB)?oldid=328545"
Community content is available under CC-BY-SA unless otherwise noted.