Can of Bug Spray

Bug Spray was a female contestant on The Wild Island (Which was cancelled and an episode never came out) . She has the personality role of Heather from Total Drama . Mean and Manipulative .

She joined Camp CaD and placed 7th out of 15 and got eliminated at challenge 9. She is currently awaiting a cast reveal for CaD 2.

She is currently competing in another camp called Camp OBESE and was 1/3 team captains .

Bug Spray is very mean and manipulative . She will try to do anything to make her win . She has many weaknesses such as the challenges not being her style and other competitors not agreeing with her ideas . She will try to do anything to make herself win , be it using explosives , setting things on fire , ANYTHING! She likes to get things over with already and doesn't like when other campers distract her. She likes to manipulate others with her words by telling lies or just telling them the truth in a very harsh way. 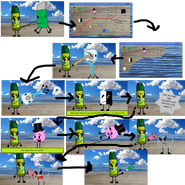 Add a photo to this gallery
Retrieved from "https://objectshowfanonpedia.fandom.com/wiki/Bug_Spray?oldid=459491"
Community content is available under CC-BY-SA unless otherwise noted.