Bucket, labeled The Valley Girl, is a female contestant on Object Havoc and the Character Voting Tournament of Object Havoc. She is currently competing but her best friend Volleyball was the third to be leaving the tournament.

Bucket is considered the stereotypical "valley girl" character of the show, constantly using "like" and "OMG", and excessively texting on her phone, claiming that it's an art. She and Volleyball are best friends to the point where they can be extremely clingy towards eachother. Bucket can be selfish at times, such as in Episode 1 where she ignored Volleyball just to avoid losing the first challenge.

In Platform Pandemonium, she is first seen chatting with Volleyball, who then yaps at Nail for banging into a tree and disrupting their conversation. During the challenge, she gets mad at Plank for offering to join an alliance with her. When the platform gets mutated and everyone starts falling off; Bucket grabs onto Binder, refusing to lose the first challenge, but ignores Volleyball, who was slipping off the platform. In the epilogue, she and Volleyball say they want to be teammates, and Plate says he doesn't want to be on the same team with either of them.

In Binders Keepers, she is first seen on the monkey bars, teasing Volleyball since Basketball had a crush on her. She is chosen onto the Diamond Daggers, and pleads for Binder to choose Volleyball next. He reluctantly does so, and the two start squealing loudly once she is chosen, annoying Wheel and disappointing Basketball. During the challenge, she is paired up with Volleyball and Plate (to his chagrin), but spends a majority of the time texting on her phone, with Volleyball watching. Despite this, her team won and she is spared from elimination.

Where Bucket is from 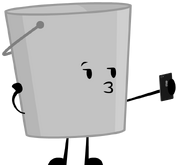 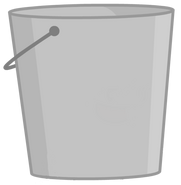 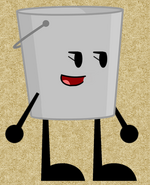 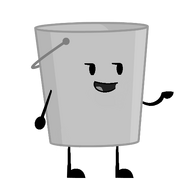 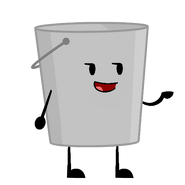 Add a photo to this gallery
Retrieved from "https://objectshowfanonpedia.fandom.com/wiki/Bucket_(Object_Havoc)?oldid=492294"
Community content is available under CC-BY-SA unless otherwise noted.