BFTWP: The Not Forgettable Objects

Brown Top Hat is an OC created by Cutiesunflower and AwesomeAquamarine. He is similar to Top Hat but is Brown and has arms. He is sometimes armless like other Top Hats. He appears as a contestant on the currently cancelled Top Hat Camp.

His Personality can be Grouchy and Sometimes Mean to other people. He is also very grumpy.

He became a recommended character that season.

He was played by NahuelFire39. Unlike BFDIWP, he is armless. He named his team The Not Forgettable Objects, and he was the first person eliminated, placing 120th. 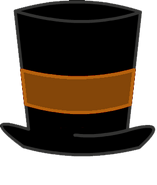 Add a photo to this gallery
Retrieved from "https://objectshowfanonpedia.fandom.com/wiki/Brown_Top_Hat?oldid=442850"
Community content is available under CC-BY-SA unless otherwise noted.