Brick is a character created by AzUrArInG.

Brick occasionally acts very arrogant and showboating, often bragging to his friends as if he is the best of the group, and creates elaborate lies about the futuristic airship he supposedly lives in, and how his family are apparently multi-billionaires. He is often rather harsh with his friends, calling them idiots or losers and can be quite verbally aggressive. Despite that, however, he has been shown many times to have a soft side to him.

Brick pose made by TWDremaker2000

Brick asset made by Minh

Brick's up asset by Minh

Brick's down asset by Minh

Brick Pose made by AzUrArInG

Brick asset made by AzUrArInG 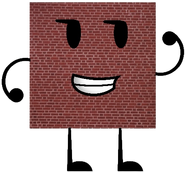 Brick seen in the original version of Object Masters

Brick pose made by ScrapperNSaranctha

Brick (along with Evil Football, Booger, Bill, Pepsi Can, and Varsity Jacket) killed by Red Ball
Add a photo to this gallery
Retrieved from "https://objectshowfanonpedia.fandom.com/wiki/Brick_(AzUrArInG)?oldid=462581"
Community content is available under CC-BY-SA unless otherwise noted.