Bottle Cap is a protagonist or a possible antagonist of the series called Shape Battle. Bottle Cap is brave, determined, strong and also very arrogant at times. He has a similar personality to Green Pentagon.

He gets quite a lot of screen time, and he's also on many episode covers.

Though he did win a prize and it was a clock (you could watch this episode on YouTube). So Bottle Cap does not seem to be very disliked, but out of all contestants, he got the most useless prize in the eliminations of Shape Battle.

He is very similar to Nickel from Inanimate Insanity though when Nickel was in Shape Battle he didn't seem very nice and they were on opposite teams.

He is the leader of Team Bottle Cap and though he had to fast forward time to get all the contestants on his team, his team did end up winning the race.

He is proved to be a little bit of a bully to Pizza as seen in episode 3b.

He is the only contestant on Shape Battle to dislike Strawberry apart from Orange Rectangle (Though he didn't appear in episode 3b because of his accidental elimination on episode 3a) as a rival in episode 3a and 3b, but mostly episode 3b when they were racing to the finish.

In the start of episode 3a, he was talking about everyone forming an alliance together, causing Orange Rectangle to tell him to not even go there. Brown Rectangle talked about stealing the million for themselves, with Bottle Cap shoving him to the ground pointing out it was a terrible idea, though not like his was any better.

So far, he has only been up for elimination once. He also complained about the elimination song along with Round Square and Orange Rectangle, and he complained twice, so at least Bottle Cap doesn't complain that much, also meaning he isn't so fussy. But overall, Bottle Cap is calm, and he will probably make it far in the game. 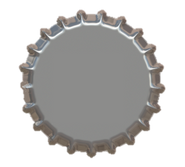 Come on, I need to win for my team!

Oh no! I'm about to lose! Damn it! F**ck Strawberry

,
Retrieved from "https://objectshowfanonpedia.fandom.com/wiki/Bottle_Cap?oldid=490916"
Community content is available under CC-BY-SA unless otherwise noted.