Bottle is a female contestant on Object Lockdown. She originated from Flipnote Object Battle.

Bottle is a tall, open glass bottle, similar to classic soda bottles from the mid-20th century.

Bottle appears to be friendly, however she has an incredibly short temper and will often burst out at others, including her own friends when she believes they have done something wrong or to anger her. She has shown that she does care about her friends when they are in danger, however.

Bottle first appears asking Milky if she could be her friend, as her original friend Rubber Ball from FOB isn't present. Milky agrees and they continue the challenge together.

Bottle and Milky are seen walking towards the finished, when Milky questions if they are close Bottle yells that there's no way she would know, ten minutes later they come across a fork in the road, accompanied by Forky, Bottle tells Milky to go one way whilst she goes the other, Forky then shouts that she is bland, prompting Bottle to kick her away. Later, when Fire Extinguisher announces that only five contestants have not reached the finish line, Bottle blames Milky and kicks her across the finish line, Bottle does not reach the finish line and is put on the Danger Team.

Bottle first appears during the elimination, where she yells at Lock for insulting her, she is the last safe and stays in the game, later she appears after Fire Extinguisher explains the challenge, stating that the Danger Team has a numbers disadvantage, Fire Extinguisher agrees and gives their team Notebook to try and make up for it, Bottle is determined to win, and buys the entire team a set of matching aprons, to mixed reception. Later, after Notebook drives Rainbow Mac away from their stand, Bottle chatices him, he tries to tell her that he hasn't been the same since he went back home, but Bottle dismisses this and says that they need to win, after the the Safe Team loses Bottle chooses Limey onto the Danger Team, stating that she finds him annoying.

Bottle is announced to be in Group 5 and first appears with them, she responds negatively to Acorn's question on if she is a musician, and after Diamond suggests they sit around and do nothing, Bottle formulates a plan so they don't get caught, when Diamond questions how they will carry out their retreat, Bottle says they could just run around and jump o ff of the stage. Later at their performance Bottle notes that their "piece" doesn't have a name, after Acorn counts down Bottle stands still with the rest of her group as Acorn runs off-screen, the group recives a -1/20 and Bottle is put on the Danger Team.

Bottle is not seen at elimination and receives zero votes, she first appears during the challenge after Grassy suggests asking her if she will join their alliance, Bottle hears them from the top of a cliff and jumps down, surprising M&M, she agrees to the invitation and continues the challenge with them, later the group is seen walking down a path, but are attacked by a trap set off by the Alien, Bottle tells Paint Palette and M&M to run and sacrifices herself, putting her on the Danger Team.

Bottle got 114 dislikes and mentions that her rapping alliance were the first ones safe in the elimination. 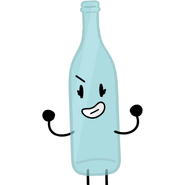 Add a photo to this gallery
Retrieved from "https://objectshowfanonpedia.fandom.com/wiki/Bottle_(Object_Lockdown)?oldid=453744"
Community content is available under CC-BY-SA unless otherwise noted.