For other uses, see Bottle.

Bottle is a female contestant in Battle for BFDI. She is also a former recommended character who failed to join BFDIA.

She had a chance to join BFDIA, but she got 36 votes, placing her 60th, and she was flung into the Locker of Losers.

In Battle for BFDI, Bottle is one of the members of Death P.A.C.T

Where Bottle is from 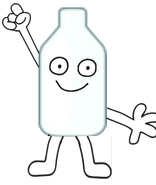