Bottle is a character created by AzUrArInG. He will not be in the reboot of Object Masters, due to the fact he was really uninteresting, bland, and pointless too.

Bottle does random stuff whenever he feels like it, also he friends to almost everyone.

Bottle's new pose made by TWDremaker2000 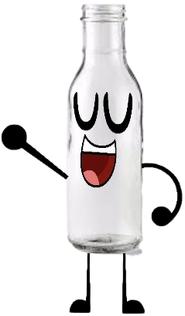 Bottle seen in the original version of Object Masters.
Add a photo to this gallery
Retrieved from "https://objectshowfanonpedia.fandom.com/wiki/Bottle_(AzUrArInG)?oldid=547293"
Community content is available under CC-BY-SA unless otherwise noted.