Boombox is a female contestant in Object Overload. She's the team captain of Team Tune.

Boombox is a pretty positive and level-headed character. She usually tells her team to stay positive when they lose, and follows her teams plans if they are good enough. She also can show some bravery.

Boombox was first talking to Clock because she wanted to help build the new recovery center, which later got replaced with the doorway of life. Then when she met Gamey, she asked him if he wanted to be his friend. In the first challenge, Boombox got to be team captain of Team Tune by knocking off the last character with a dodgeball, which was Toothy.

Boombox was talking to Toothy about how she hit him with a dodgeball. When Gamey told him and Clock to come over to grab their immunity ticket. After Gamey told them the challenge, Boombox started to choose the team members that she wanted. When she choose three members at the same time onto the team, Clock told him that she is only allowed to choose one member at a time. But she defended herself by saying that they're no rules, so Clock also choose three members too.

Boombox did not have that much screen-time in this episode. She is first seen walking until finding a button on the ground, which she presses. A hole from the ground opens and a pie from the hole appears, which gets thrown at her.

Later in the episode, Boombox gets hit softly (but not enough to hit her off) by a dodgeball. While Toothy was speaking, she kicks the dodgeball and it aims for Toothy, knocking him off mid-sentence. 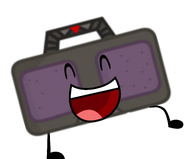 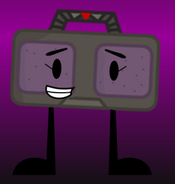 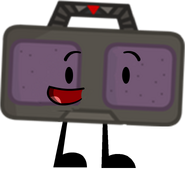 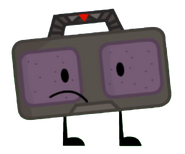 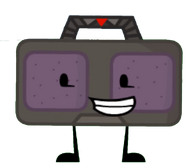 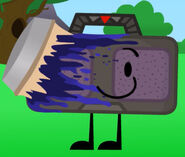 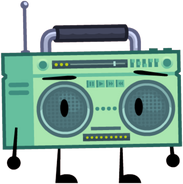 BFB Saving Icon
Add a photo to this gallery
Retrieved from "https://objectshowfanonpedia.fandom.com/wiki/Boombox_(Object_Overload)?oldid=565400"
Community content is available under CC-BY-SA unless otherwise noted.