Object Shows Community
Register
Don't have an account?
Sign In
Advertisement
in: Characters with unknown genders, Characters, A to Z,
and 25 more

"You Know Those Buttons Don't Do Anything, Right?"

Boom Mic is a recommended character and was up for voting in "You Know Those Buttons Don't Do Anything, Right?" to join Battle for Dream Island: The Power of Two. They were recommended by Abject Studios and first appeared in "Today's Very Special Episode". A common running gag in their debuting appearances is that they'd accidentally hit their head on something.

Boom Mic appears to be a grey boom operator. Boom Mic's limbs are placed on the black colored base of their grey boom. Their microphone has grey fur wind muff. Their face is further away, on the microphone; attached by a black mount.

Boom Mic appears to be nervous and quite jittery.

The Insane Battle Of Objects[]

Marshy is usually very silent and is very supportive of those she is close with. She is very self-conscious and she’s not very happy with herself. She wishes she could be more outgoing, and looks up to those who are. She’s cautious with her own surroundings and always trying to not screw up.

Boom Mic is friendly and respects almost everybody. However, she has anxiety problems and very frequently gets anxious in many situations. This is due to her belief that if she gets hurt badly, her "loudness" organ will activate which is going to make her speak way louder than before and is going to hurt everyone's ears. This is also the reason why she is so quiet while she speaks. Despite this, she was never loud before and nobody remembers her being loud. She might be friendly but she still has a hard time socializing with others. Boom Mic is known for her constant panic attacks if she gets too anxious and even at these moments, she is only slightly louder than normal, not loud enough to hurt anyone. Boom Mic seems to be a professional singer despite never entering a singing competition before and everyone says that she is great at it. Boom Mic hope some day that her "loudness" organ gets remove from her body despite having no evidence that this thing exist. It is unknown if her organ even exist in the first place but she believe it exist because she is a microphone. Every time someone touches her head, it always tickle for her and she likes it. She is also a little clumsy but not as clumsy compared to Anchor. Boom Mic tries to not look anxious to avoid getting bullied but she fails most of the time.

Boom Mic is stubborn, as she can hit her head on anything, usually unintentionally. She is also very shy. 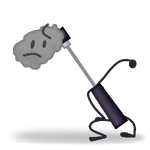