Berry is a female contestant on Object Lockdown.

Berry is a circular shaped blueberry with a large brown stem.

Berry is a very kind-hearted contestant. She loves to make others happy and is very generous. She stands up for her friends and wants to help them out when they are upset. Sometimes she can get a bit too wrapped up in the competition, however, such as when she suggested barging into people's houses in order to find a way to revive her fellow competitors, and she often gets worried when her team falls behind.

Berry first appears after Stop Sign yells at Pumpkin and Cherry for attempting to dig to the finish, she then tells him to get over his ego mind his own business, Stop Sign does not take this well and yells at Berry, telling her to not insult policemen and begins bragging about how many people he was arrested, before he can finish, however, a giant bowling ball attached to a rope swings in out of nowhere and hits Stop Sign, knocking him away, Berry is pleased with the outcome and is thanked by Pumpkin, she then smiles and walks away.

Berry first appears as Yarn is lamenting how she is alone, Berry walks up tells her that she feels her, then offers her a lollipop to cheer her up, Yarn happily agrees and asks what flavours she has, to which Berry replies that all she has are berry lollipops, Yarn finds this messed up but takes it anyway, Berry then looks worried and tells Yarn that she has to leave. Berry crosses the finish line off-screen and is put on the Safe Team.

Berry first appears during the Safe Team's planning time, telling Snowboard to let someone else contribute instead of bossing them around, she does not appear during the challenge itself. When her team ends up losing she is chosen to be on the Danger Tea by Balloon, who still despises her from the events of Super Object Battle.

Berry first appears at the elimination, where she is pleased with the large number of votes that were cast, she receives 255 likes, the second most, she is then declared safe at 122 dislikes, the second least. Berry is then of course announced to be in Group 1, the Danger Team, at their practice time Berry asks the group if anyone can play an instrument, Bucket then tells the group that he can play the saxophone, and his performance pleases Berry along with the rest of the group. At their performance Pumpkin knocks into Bucket, cutting him off and giving the group a 4/20, putting Berry on the Danger Team once again, Berry then asks if she can murder Pumpkin for his action.

Berry does not appear at the elimination and receives zero votes, she first appears after Lock announces a change in plans, Berry questions why she isn't worried over Fire Extinguisher's abduction, to which Lock admits that she hired them to abduct him. Later, Berry appears after the Bear kills Cherry and Pumpkin, commenting on the double kill, the Bear then growls at her, and she chooses to walk away before it attacks.

Since Berry survived the previous challenge she is immune, but Fire Extinguisher makes the challenge to revive the dead contestants. Berry suggests to split up in groups so Umbrella puts her in a group with Yarn, Hot Sauce and Stop Sign. Yarn and Berry start discussing about Umbrella. When they arrived at the village Berry said that they should break into people's houses but Stop Sign rejected her idea because breaking into houses is against the law. Thanks to Umbrella's group Berry is immune once again.

For the challenge, she was chosen to be a gatherer. When she and the rest of the gatherers reached the island with supplies, after Stop Sign had told everyone to grab everything, she had stated that idea was "unfair." The only other time she is seen during the episode is when Bottle snatches supplies from her, throwing her off guard. Because of her team not having a house, she was placed onto the danger team.

Where Berry is from 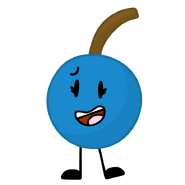 Add a photo to this gallery
Retrieved from "https://objectshowfanonpedia.fandom.com/wiki/Berry_(Object_Lockdown)?oldid=440123"
Community content is available under CC-BY-SA unless otherwise noted.