Battle for Dream Island has its own wiki so go and help it out!

For the series itself see Battle For Dream Island (series).

Battle for Dream Island, abbreviated as BFDI, is an object show that first premiered on January 1, 2010, on the YouTube account jacknjellify. The show takes place in a fictional location known as Goiky. There are a total of 25 episodes in the 1st season. It is known as the first-ever object show. This season ended on January 1, 2012; being succeeded by Battle for Dream Island Again. There was also a season 3 called IDFB (Or dnalsI maerD roF elttaB), which came out on September 1st, 2016. And then there was Battle for BFDI, which came out in late 2017.

This season involves 20 (later 21) inanimate objects who are casually living together. But when the host, the Announcer, falls from the sky and tells everyone about the luxurious island otherwise known as Dream Island, competition sparks, and everyone begins battling each other for the island. The announcer hosts almost all of season 1 but leaves in Episode 25: Return of the Hang Glider.

There are a total of 20 contestants, later it would be 21.

The sequel to BFDI called BFDIA, Battle For Dream Island Again began on June 29th, 2012, and has since been on a hiatus since episode 5e. It has 22 contestants, competing once again for Dream Island. But now called Farm island. Another sequel that was released on September 1st, 2016 was IDFB also known as Island Dream For Battle or It's Deep Fried Breaths! From Coiny at the end of the episode “Welcome Back!“ And is left on another hiatus because of school.

There is also another sequel called Battle for BFDI hosted by Four, which began on November 3rd, 2017.

This section is for fanart, created by the people who love BFDI. 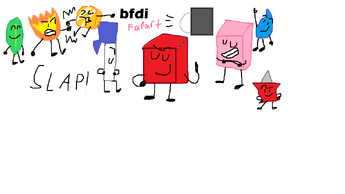 some of the bfdi cast 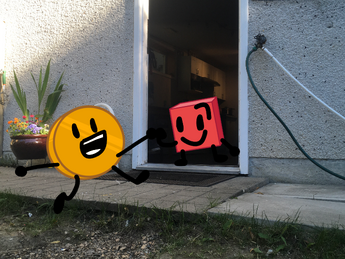