Band-Aid (AKA: Bandage) is an OC made by BrownFamily1108.

"I use they/them pronouns"
Band-Aid uses different gender pronouns depending on what object show it is in. When editing, use the proper pronouns used in the object show in question.

Band-Aid is nice, but she is also quite shy. Band-Aid isn't the smartest character. Band-Aid like to hang out with her friends (notably Cotton Swab), but doesn't like mean characters (such as Slime Bomb). 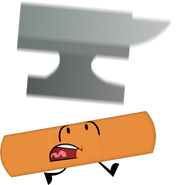 Object Megaverse Design (contains bandages)
Add a photo to this gallery
Retrieved from "https://objectshowfanonpedia.fandom.com/wiki/Band-Aid?oldid=560309"
Community content is available under CC-BY-SA unless otherwise noted.