Start a Wiki
Banana is an object who was recommended onto Inanimate Insanity Season 2 for the T-shirt contest and an assistant on the show "BFDI Survivor". Banana was created by OfficialMatrVincent, who makes BFDI Survivor and also recommended him onto II S2. Banana lost to Yin-Yang in the voting.

Banana was introduced as a minor character in the storyline of BFDI Survivor about halfway through the camp when he was given an internship for the show. However, later in the episodes, he becomes the main character of the storyline.

Banana made his debut appearance in "One More Night" when he applied for an internship for the show, revealing that he needed the job for college credit, with Speaker Box questioning how Bananas can go to college. After he earns the job, he is not seen for the rest of the episode.

He did not appear in the next episode, but appeared in the following episode "The Lovely Couple" during the debuting contest. He asked Speaker Box why they were having a 3rd debuting contest, saying that it would be too hard on the original contestants. Banana get's angry at Speaker's logic, and goes for a walk. During his walk, he questions why he's pressuring himself to be on the show. He reveals that he is looking for love, and he finds Golf Ball tied up by Snowball in an earlier episode. After saving her, they fall in love.

In "We 3 Twists", Speaker revealed his selfishness to the world, forcing Banana to make a structure for the challenge. After almost revealing that GB escaped from the TLC, he freaks out and runs away, with Speaker weirded out. He had to hand out prizes to anyone who wanted to drop out of the challenge. The first prize were cookies, but no one dropped out. Banana was late to present the 2nd prize for an unknown reason at the time, but he did present the prize, it being a win token which Yellow Face dropped out for. Due to not coming for the 3rd prize, he was caught on a date with GB and was suspended of his internship while GB was sent back to the TLC.

Banana's suspension was lifted in "Inner Warrior" when he had to spend his college money to buy invisible obstacles, much to Banana's exhaustion and hatred as he responded that Speaker didn't know how hard it was to get that stuff and build it, but Speaker told him to be quiet. Later, Speaker used Banana as a foot rest (or a Speaker rest, I guess) which Banana had trouble with. Due to the fact that he couldn't go to college due to his money being wasted for a stupid gimmick and Speaker ruining his life, Banana quit his job as intern and was reassigned into the TLC. Due to this, there was no tribal council.

Banana is mentioned in a special 9-minute episode (part of Episode 20 Part 1) when the jury members (Blocky, Firey and Leafy) are given a note saying that there is no elimination and Banana was fired.

In "The Good, The Bad, And The Acromanic", Banana is revealed to now be the TLC's prison guard. With 4 of the contestants starting to have weird behavior, Banana realizes and tells everyone that this is not normal, and he is writing down what is going on. He believes that what is happening is some kind of crazy virus, which is revealed to be semi-correct in a future (un-aired) episode.

In EP021 (un-aired), Pin and Spongy succumbed to the virus, which caused Banana to form a plan with Bubble, Rocky and Eraser to try to escape the TLC and rejoin the game while Banana warned Speaker of the situation. While Rocky rejoined the game, Bubble and Eraser were sent back while Speaker didn't listen to Banana and sent him back as well.

In EP022 (un-aired), Banana, as well as Bubble and Eraser, returned to the TLC to find that Teardrop and Golf Ball were infected as well, leaving them as the only 3 not infected in the TLC.

In EP024 (un-aired), Banana became the only contestant in the TLC not to be infected.

In EP025 (un-aired), it was revealed that the cause of the virus was Evil Leafy, and after a long fought battle for control of Banana's body, Evil Leafy finally won, infecting Banana of the virus.

He once again had a major role in the 5-part season finale (excluding Part 1, which was the recap of all the episodes, and Part 4, which is just an elimination).

In "The Final Challenge" (Part 2), due to being infected, he was able to get all the infected contestants out of the TLC. However, before joining the group and heading to the Jury House, he stepped on a piece of paper which was revealed to be his notes on the virus. Seeing this, Banana is cured and returns to his normal self. Later, he is able to pull Golf Ball out of the group and cure her by showing her a golf club that her dad used at a special event. They later meet up with Tennis Ball, who was never infected, but knows what is happening. They make a plan to warn the Final 5 and Speaker and get them out of the set before the infected contestants come. Near the end of the part, they find Pen and talk to him. However, they realize they are too late with the TLC contestants and Jury on the horizon ready to attack.

In "The Infection" (Part 3), Banana, as well as GB, TB and Pen, start to run away from the infected contestants. Banana get's serious and forms a plan to save everyone. While Pen goes to warn everyone, Banana, GB and TB stay behind and hide in bushes. Snowball passes by Banana's bush and Banana pulls him in and cures him while TB cures Firey. Banana then leads the counterattack with 12 others and attacks the still infected contestants. Despite the ambush, they end up getting destroyed and retreat. Banana tells Pen of the situation but then however realizes that they too have retreated. Later, Banana gathers everyone that isn't infected and forms a plan. Even later, he walks right up to the camp and talks to Match (infected). Banana "tries" to cure her, however he soon realizes they created a trap and he fell right into it. Banana surrenders to Evil Leafy and her infected posse. However, he asks for one last wish before he is re-infected. He wishes to call GB to tell her that the situation. However, he then tricks Evil Leafy when she grants his wish and orders the attack, which shocks everyone. Evil Leafy tells Banana that they still can't win since there are more infected than not infected, which Banana denies. It is then revealed that the recommended characters are now helping and they all attack. In the end, everyone but an unknown person is cured and Evil Leafy escapes to plot her revenge.

In "The Winner Is" (Part 5), Banana appears at the start of the episode handing a note to the Final 4. Later, Firey and Fries announce that they do not want to be part of the jury, and are removed. Raytonlin1, portrayed as Banana, becomes one of the two replacements in the jury (raytonlin1's original character, Yellow Face, was being used for plot purposes, so he was portrayed temporarily as Banana). Banana ended up voting for Pen, and with 6 votes, Pen eventually won BFDI Survivor! Horray! Unfortunately, Banana wasn't as happy. It was revealed that now that BFDIS was over, he didn't know what to do. He had no money, no job and no where to go. Then out of nowhere, a shadowed figure approached Banana, later to be revealed as MePhone4, offered him a job as co-host, in which Banana thanks MePhone4. After Speaker Box concludes the season, Banana (voiced by OfficialMatrVincent) gives an after-story of what came to be of all the BFDI Survivor contestants, revealing things like how he spent the following weeks with Tennis Ball and Golf Ball, and how like Ice Cube did, Flower and Fries also went missing. He ends the video off with him saying "I don't know what's going to happen... but there's only one way to find out" before the credits roll.

It was confirmed in a profile pic that he will return for Season 2 "Inanimate Inanity Survivor" as MePhone4's co-host. He will have a new body, the body that he got in the II S2 T-Shirt Contest. He will do the eliminations with a speaking role (voiced by OfficialMatrVincent) and will once again have a main role in the plot.

Banana was recommended by OfficialMatrVincent into Inanimate Insanity to join Season 2 for the II T-Shirt contest. After the deadline was reached, Banana was revealed to be one of four characters recommended into the show, with the others being Rubber Ball (legotd61), Yin-Yang (BFDIDubita23) and Guitar (waliugifreak789). Unfortunately, the popularity of Yin-Yang's character caused him to get the most votes and join Season 2. 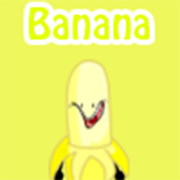 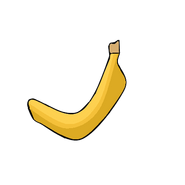 Add a photo to this gallery
Retrieved from "https://objectshowfanonpedia.fandom.com/wiki/Banana_(OfficialMatrVincent)?oldid=404670"
Community content is available under CC-BY-SA unless otherwise noted.