Banana is a male contestant on Object Lockdown.

Banana is an abnormally shaped bright yellow banana with a large brown stem, his design prior to OLD 3 also included a leaf on his stem.

Banana's dream is to become a professional dancer. Because of this, he practices dancing as much as he can during the show. He also loves cracking jokes and he generally acts goofy all of the time. He has a habit of eating snow, as seen in Episode 8.

Banana jumps on top of Grassy's Taxi and both Grassy and Paint Palette tell him to get off, which he refuses. Since no one is driving, the car, it crashes into a mountain.

Banana tells Grassy that they crashed into a mountain, because Grassy forgot what happened. Paint Palette said that Grassy sucks, so Banana said "Oooh, get burned!" So Grassy told Banana to go jump of a bridge.

Cooking by the Book (Yo)

Banana is seen in the video for this song, although he doesn't get a singing role.

Banana gets put onto group 4. He also got an asset update. After Fire Extinguisher asks if they're ready to perform, Banana replies "No." Banana was on the safe team along with: Grassy, Paint Palette, Stop Sign, M&M, Snowboard, Hot Sauce, Skateboard, Milky, and Notebook. Also, he gets another asset update in this episode.

Banana gets his final asset update, for now at least. In the 2017 intro, he is playing on a "Jacktendo Zwitch" with Notebook, but than Cone comes up and scares them. Banana, along with the rest of the safe team got to choose who on the safe team to get eliminated. Banana votes Umbrella for being mean. Banana is seen singing the first line of "Boulevard of Broken Dreams" by the popular band "Green Day." Banana than comes across a tent with Notebook and Bucket in it. Notebook is sleeping, but Banana shakes him and he wakes up. Banana than informs Notebook that there's a challenge going on. Banana asks Notebook if he can watch Killer Show 54 with them. An alien than shoots Banana and Notebook, so they got put on the danger team.

When Lock says that Banana, Pumpkin, and Teapot were safe, Banana exclaimed "Oh, yay!" Also, since the safe team contestants revived them, the same people were UFE again.

When Fire Extinguisher was explaining the challenge to everyone, he used Banana as an example for the gatherers. Banana was a builder for the danger bois. Banana saw ducks flying around after getting hit with wood is a reference to how is most classic cartoons when someone got hit with something and fell over little ducks flew around them. Banana tells Notebook that he doesn't think there's enough color in the house that they're building. Notebook tells him that they're not trying to make it colorful, and go for a modern vibe. Banana doesn't listen and makes a weird face while he grabs a paint bucket and splashes blue paint onto the wall. Acorn and Notebook get mad at him for doing that. Banana tells Circle, and Dollar & George that they shouldn't underestimate their team, especially him. Fire Extinguisher asks what that paint spot is doing there; Banana replies that it's his little work of art. Exit Sign says that it looks really ugly. Acorn calls Banana stupid for doing that. Exit Sign gives the house a 6 because of Banana's paint splat. 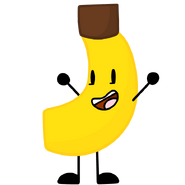 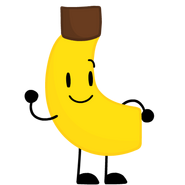 Add a photo to this gallery
Retrieved from "https://objectshowfanonpedia.fandom.com/wiki/Banana_(Object_Lockdown)?oldid=474724"
Community content is available under CC-BY-SA unless otherwise noted.