-Banana after Camera stood up to him in CTW 1.

"Come on losers, we have a challenge to win."

Banana is not social and not special, he ignores anyone and he bullies whoever is annoying him. He is a part of The Sweet Objects and of course Challenge To Win

Challenge To Win Episode 1 The Meeting.

When Camera and Candy Cane were walking together Banana tripped Candy Cane much to Cameras dislike, but Banana didn't seem to care. Melon then asked if Banana and him wanted be friends but he rejected him and Melon made the forever alone face.

When Candy Cane and Asteroid were picking teams he was picked last on the Sweet Objects after Asteroid picked Hammer because the thought Banana was worse than him. He then said "Come on losers we have a challenge to win."

At the challenge it is unknown how he did but his team lost so he was put up for elimination.

At the elimination he got 2 votes to win a prize which means he was the third most liked person not winning a prize. For the dislikes received 5 votes which was the most out of everyone which resulted in him being eliminated. He wasn't very happy about the turnout responding in "You can't do this." Blue Planet didn't care. And he said it again but this time he was Evil Banana recommended by EvilBubble. He was then eliminated.

He was shown at the end flying towards the eliminated contestant place. When he landed he said, "Hammer don't go here." This could mean that Hammer and Banana are friends.

When Umbrella was spat out by Microphone and sent to the Eliminated Contestants Place Banana is shown there.

At the end of the video when the eliminated contestants get their presents he just says, "Whatever losers bye bye."

When Blue Planet goes to retrieve Umbrella the other eliminated contestants including Banana tried to escape but failed.

At the end of the episode his feet show when Hammer is talking to Umbrella who was swimming by.

One of the drawings had a yellow stick like object saying Nooo on what looked like the eliminated contestants place. This could possibly be Banana.

In the voting Banana voted for Microphone to be eliminated because according to him he is a midget, bossy, weirdo. And he liked Yellow Spider because he is yellow like him.

Since there was a rejoin, everyone got to make a speech about why they should rejoin. His speech was, "I don't care just vote for me."

In the Eliminated Contestants Place Star said "Hey guys, you know who is going to rejoin right." Banana though said "No one asked and no one cares." Later Microphone thought he would rejoin though Banana tought he couldn't because he just got eliminated but Microphone thought if he rejoined he would just get eliminated again. When star said that the most beautiful object rejoins and Banana along with Key and Hammer say, "No."

At the rejoin Banana only got 9 votes which was the 3rd most which is not enough and was sent back to the Eliminated Contestants place much to his dislike.

Challenge to Win Episode 10 Not Amused

On the Challenge to Win toothpaste one of the toothpaste has a picture of a crudely drawn Banana with no arms saying "I YUM BANBANBANABA LEMENATED 1st NUMBER ONE!!!!!"

When all the Eliminated Contestants were getting presents he hoped he got the Bananas in pajamas t-shirt.

Challenge to Win Episode 15 A Conflict Leads to Mistakes

When Fat Alien teleported all the eliminated contestants to him Banana was seen.

There is a rejoin so each contestant made a speech about why they should rejoin. Banana's speech was, "First eliminated always rejoins, and I should rejoin because I don't care what you think." 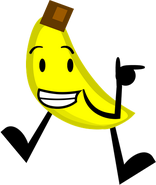 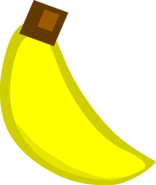 Add a photo to this gallery
Retrieved from "https://objectshowfanonpedia.fandom.com/wiki/Banana_(CTW)?oldid=404804"
Community content is available under CC-BY-SA unless otherwise noted.