Not to be confused with the BFDI camp by carykh, BAGUETTE.

Baguette is a contestant in Brawl of the Objects. He only speaks French so whenever he speaks, he requires subtitles, which are apparently sentient themselves, and are friends with Baguette.

But in Episode 12, when he was eliminated, he confessed that he actually doesn't speak French.

Baguette is a bit of a loner, he doesn't get along very well with the others. However, this is because of a major lingual barrier. Baguette can speak French and English, and relies on Subtitle to translate his words for him (only if he talks in French). Despite this, he has made a few friends, especially in Boat, who is the only person who's attempted to learn French. Said above, it was all revealed that he actually uses French stereotypes to trick everyone into believing that he can only speak French and admitted that before he got eliminated, he is rarely nice to contestants and has a competitive nature. Baguette is quite full of himself and frequently insults and even harms other contestants.

Where Baguette is From 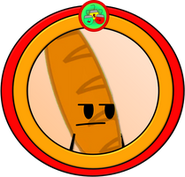 Add a photo to this gallery
Retrieved from "https://objectshowfanonpedia.fandom.com/wiki/Baguette?oldid=603598"
Community content is available under CC-BY-SA unless otherwise noted.