BAGUETTE has its own wiki! Come and check it out, and feel free to help it if you want!

BAGUETTE (Battle Among Gelatins Using Expertise To Take Everything) is a BFDI camp made by carykh. This camp has 18 contestants that are based on Gelatin Flavors (Except for Cement and Poo). As of BAGUETTE 5E there are 13 contestants left. BAGUETTE has been confirmed to be cancelled, due to the fact that it has been going on hiatus for too long, and the creator, Cary Huang, decided to create another camp, Ten Words of Wisdom. (TWOW)

The first challenge was called: BFDI Trivia. They had to answer the first five and the last five contestants of BFDI(Not BFDIA). It turns out that all 18 contestants did the challenge! After showing the characters and their generation, the answer was: 1: Firey, 2: Woody, 3: Teardrop, 4: Spongy, 5: Match, 17: Needle, 18: Pen, 19: Leafy, 20: Pin, 21: David. Bubble Gum as the first to answer and gets a score o 4.22. Tangerine and Poo were next and got:7.18 and 6.87. Banana and Lemon are next and got 4.38 and 3.84 and after that Tangerine and Poo stay for one more episode. Lime,Cement,Peach,and Blueberry were next and got: 7.80, 8.05, 7.87,and 7.00.Watermelon and Cherry were next and got 6.20 and 7.60. Watermelon made a mistake by putting Blocky's name two times but is safe for this episode.Green Apple was next and got 7.29. Then Raspberry was next and got 6.34. Lychee and Strawberry were next and got 2.57 and 3.24. After that,Bubble Gum and Banana had low scores but they are safe for one more episode. Acai, Grape, and Blackberry were the Final 3. Acai gets a score of 7.31 and puts Lychee in the Danger Zone.Grape gets a score of 7.87 and puts Strawberry in the Danger Zone. And finally,Blackberry gets a score of 5.19 and puts Lemon in the Danger Zone. Cement gets immunity for 3 episodes while Peach and Grape have immunity for 2 episodes. The episode ends with Lemon, Strawberry, and Lychee being up for elimination.

We start the episode with the elimination.There were 248 votes.The votes are: Lemon: 45, Strawberry: 36, Lychee: 167. Lychee get squashed for being eliminated. The contestants go from 18 contestants to 17 contestants. The second challenge is a staring contest. If two gelatins stare at each other,they explode.If a gelatin stares at a dead gelatin, that gelatin will explode. There are five rounds of staring.

The episode starts with some old symbols then they start the game.Lime makes a confession about how he/she enjoyed this camp. Strawberry makes a confession about he/she is glad about being here. Raspberry makes a confession about how people are voting for Acai because they don't know what she is and they aren't voting for Banana because he almost up for Re-Sign Ups. Poo makes a confession that the prize for BAGUETTE is to recommend a character for BFDIA because everyone would love that. Cary accepts this suggestion(Go Poo!). We then go on into the elimination where Banana makes a confession about how he/she didn't do the challenge and hopes hes not eliminated.Bubble Gum makes a confession that he/she dosen't want his friend to be eliminated. Peach makes a confession about how he/she survived elimination. There were 246 votes (It went down) The votes are: Banana: 35,Acai: 151,Cherry: 60. Acai gets squashed by getting eliminated from a challenge that was based on luck and no skill involved.The contestants go from 17 contestants to 16 contestants. The third challenge is: MORE BFDI TRIVIA!!!. This time,for each question, answer it to get 4%. The line questions are: Who said these lines? 1.Octadecillion 2.What good is this? 3.One of them is so at stake! 4.OMPF 5.Why would you do something thats so wonderful? 6.Just, not right now 7.Don't fall this time 8.Arch Enemies 9.I guess he neve... got to learning it 10.Oh,okay then. The Questions are: 11.How many BAGUETTE contestants got #4 correct? 12.Should you be cheating? 13.When was Pencil scary? (Not just scary,but REALLY scary?) 14.How many questions have you gotten right? (Not including this one) 15.In BFDI, who was eliminated with the largest number of votes? 16.In BFDI, who was eliminated with the largest percentage of votes? 17. In BFDI,who was eliminated with the fewest number of votes? 18. In BFDI,who was eliminated with the fewest percentage of votes? 19.Who won Total Firey Island? 20.Who received our first tribute video? 21.Who is still waiting for their tribute video? 22.What are the dimensions of Ice Cube? 23.In which episode did the designs of the arms and legs change? 24.How long are all the BFDI episodes combined? 25.How many questions did you get wrong so far? (not including this one). The Extra Credit is to upload a video that features BFDi in real life and they will not be paper cutouts.Every object that is shown will give you +3%.You will get Extra Points if you include screaming in the video 4A, 4B, and 4C

At the beginning, Peach is talking about her video, and that she feels alone. 171 votes were cast to either Cherry, Bubblegum, or Strawberry. Cherry got 55 votes, making her safe. And by 4 votes, Strawberry was safe, giving her a spot in the Final 15. And Bubblegum, with 60 votes, is eliminated. He gets crushed. Cary (The Host) points out that this is the Final 15. And explains that the next that the next challenge is Comic Strips!

With Bubblegum gone, the episode starts with Tdafanclub leaving, seeing him/her go is so mindboggilingly painful. Limes comic could not be opened, so Cary gives him immunity, and Strawberry and Cherry did not do a comic. And spots for Banana and Strawberry are open. (The first re-sign ups ever in BAGUETTE) In the confessionals, Cement is talking about how he thinks hes gone, because he used Paint.NET for his comic, but he says, if he does leave, he wishes Peach and Tangerine good luck. And that Gelatins when they are happy always say "Okay, go for it" Cary points out that he is correct, and Gelatins are optimistic risk takers. Lime says he had fun with the chaleenge but Cary apoligizes since he or she could not open the file. 11 comics were sent in. The comics starts with N. Which has to do with Donut telling Dora to stop talking, but Dora slips and sunglasses and says "Hola, gentlemen" and Donut asks him if she is okay, and then it says To be continued... In O, Needle says Hi to Leafy, and Leafy calls her Needy, and Needle slaps her saying her famous catchphrase, and then Leafy flies away, which Needle is scared about.

Cycles in this chart refer to a certain peroid of time in the game, composed of at least a Challenge for Immunity and an Elimination

[Brackets] indicate that the contestant had immunity by wining a previous challenge.

Removes half of your votes.

Removes half of your votes and gives then to another Gelatin of your choice.

Swaps your number of votes with another Gelatin of your choice.

Turns you into metal. Completly useless.

When you use it, guess how votes you will get. The difference between your guess and the real vote count will become your new vote count.

If multiple gelatins use this token at the same elimination, both their vote counts become the lower of the two.

The first voter's vote is the only one that counts.

Use it and you will recieve every token used at the elimination.

You get to steal any token from a gelatin who is NOT up for elimination!

if you use it along with another token, you get to keep that other token.

Use it along with 2 other tokens, all at the same elimination! 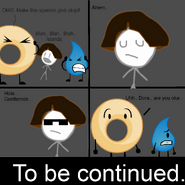 Sample of BAGUETTE 4B comic 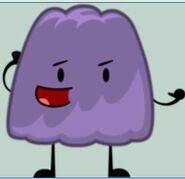 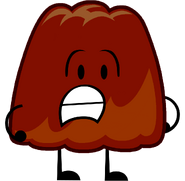 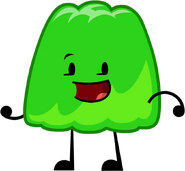 Note: it's not all of them, this is all i could find (made byThirtySkunk910).