Antimatter is one of the characters in Animated Inanimate Battle.It was a member in Team 5.

Antimatter appears to be a collection of transparent shapes, including a purple, green, and yellow triangle as well as a pink/red jagged shape. He is the only character with a jagged mouth.

Antimatter is the second most-powerful character (behind Oodle) and the most powerful contestant. They say they can "essentially do anything" and how they "exist everywhere known in the universe". They also have the ability to shrink themself into the size of an atom. 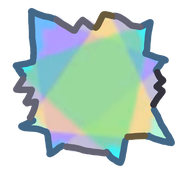 BFTUW Asset
Add a photo to this gallery
Retrieved from "https://objectshowfanonpedia.fandom.com/wiki/Antimatter?oldid=547591"
Community content is available under CC-BY-SA unless otherwise noted.