Acorn is a male contestant on Object Lockdown.

Acorn has a light brown shell with a darker brown cap with a zig-zag pattern, prior to Episode 3, he had worn an eyepiece/monocle, likely to express that he has an "Posh" attitude and voice.

Acorn is an arrogant and overconfident contestant. He also is a bit of a perfectionist, and always tries to be a leader for his team. Despite his leadership skills, he is shown to be one of the more intelligent contestants due to having a Master's Degree. He dislikes dumb people, especially Cone and Banana. He gets disgusted easily, as seen in Episode 8.

Acorn first appeared in this episode, where after insulting Umbrella and telling her to leave if she did not want to be on the show, she scares him into running over to the finish line, putting him on the Safe Team.

Acorn did not appear in this episode, as he had already finished the challenge in the last episode.

Acorn first appears after the intro, where he states that searching for a replacement for Drago is a waste of time, as he presumes the viewers probably didn't like him anyway. A character named "Dino" then shows up and is immediately hired, Acorn retorts by saying that he isn't a "dino" and reveals that he is Notebook in disguise. He does not appear for the rest of the episode and he is not put on the Danger Team.

Acorn is announced to be apart of Group 5 in the competition, along with Bottle, Yarn,Diamond and Can and appears when they are trying to find a genre of music to use, stating that he only has interest in classical music, and asks if anyone else in his group is a musician when they respond negatively, he says they're doomed. When his team is called up, he introduces them and their unnamed song, then counts down before shouting retreat, and proceeding to run off stage with his team. He later appears when Fire Extinguisher says his group got a -1, saying the performance took precise timing and lots of effort, where which Computer was doubtful of.

Acorn first appears during the elimination, noting to Lock that it was said there would not be any eliminations on the show, to which she reminds him that the Lockdown only lasts for three episodes, he does not receive any votes at elimination and is safe, he later appears after Diamond is killed by a baseball, agreeing with Snowboard that the chance of such happening was very low, once Edgy Diamond shows up he asks who he is, but is then killed by him along with the rest of the contestants present, and thus is put on the Danger Team.

Acorn first appears during the elimination where he is in the bottom four with Snowboard, Circle and Cone. Acorn was safe with 247 dislikes.

During the elimination, Acorn received the third most dislikes. He received 166, which is coincidentally the same amount of likes he got. In the challenge, Acorn was chosen to be a builder, and helped with the house. He was on good terms with Notebook, they helped each other. However, he was upset by Banana when he spilled the paint bucket on a wall of the house, stating that he had "doomed" the rest of his team. His team got second place, and were placed onto the safe team.

Where Acorn is from 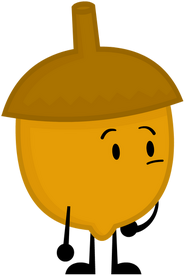 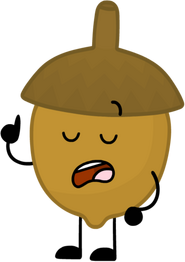 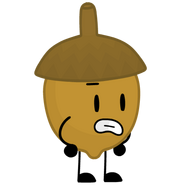 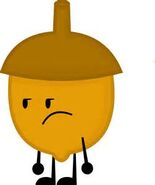 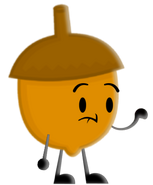 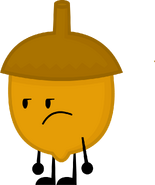 Add a photo to this gallery
Retrieved from "https://objectshowfanonpedia.fandom.com/wiki/Acorn_(Object_Lockdown)?oldid=482383"
Community content is available under CC-BY-SA unless otherwise noted.