8-Ball was a male recommended character that could have joined BFDI, but he failed to do so. In Reveal Novum, he would have joined BFDI, but with 8 votes (coincidentally), placing 15th place (along with Book), and he was sent into the Locker of Losers. He also failed to join BFDIA. He was a contestant in BFB, on A Better Name Than That, until his elimination in BFB 8, coincidentally.

8-Ball first appears to Gaty about what is her favorite number, and Gaty's favorite number is 3. He lets Gaty know that he doesn't have a favorite number. In the first challenge, 8-Ball, along with Basketball were launched into the basket. 8-Ball's in charge after Golf Ball dies, and he used the trebuchet to launch the basket to X.

8-Ball was seen talking to Blocky about what happened to Golf Ball, but Blocky already killed her along with Tennis Ball last episode. 8-Ball later appeared biting the jawbreaker, and he found Golf Ball, making them safe for another episode. 8-Ball replaced Golf Ball as the new team leader instead.

Why Would You Do This on a Swingset

8-Ball didn't appear until the third contest who avoids Golf Ball's directions to do the swingset challenge. The rest of the team think 8-Ball is a better leader, but not Golf Ball.

8-Ball didn't appear until the fourth contest, which is to make Four. 8-Ball wasted his time in the challenge making Basketball glad to listen to him. Golf Ball got paper and markers to write the number four. Grassy starts to continue 8-Ball's orders instead of Golf Ball's. 8-Ball's team nearly lost the challenge and it was his fault.

Coincidentally, he was eliminated in this episode with 4814 votes. He got crushed by the moon and he wasn't seen for the rest of the episode since he died.

in thatkidoverthere's fanon, he has 8 brothers and a sister

Where 8-Ball is From 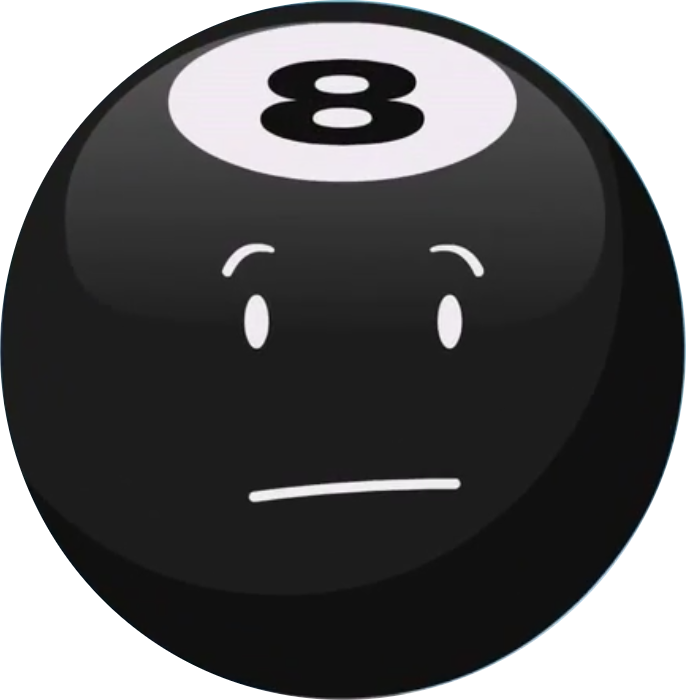 8-Ball, along with basketball try to go to a portal to go to the BFB world.

Characters
Retrieved from "https://objectshowfanonpedia.fandom.com/wiki/8-Ball_(BFDI(A)/BFB)?oldid=530950"
Community content is available under CC-BY-SA unless otherwise noted.