Gold
100 is a male OC by Cutiesunflower.

He appears to be the number 100, colored in gold. He wears his own crown because he's a king.

He's nice, and he can help others sometimes. He can be clumsy at times like Tennis Ball due to him being armless. He's also dumb. 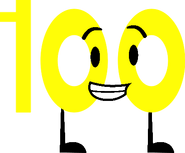 His older pose made by Cutiesunflower.

Retrieved from "https://objectshowfanonpedia.fandom.com/wiki/100?oldid=541288"
Community content is available under CC-BY-SA unless otherwise noted.